The Rotary Club Sassuolo-Casalgrande was officially admitted as a member of Rotary International on 2nd February 1971 and was granted its charter on 7th May of the same year. It was the 50th Club of the then 186th District (Emilia Romagna, Republic of San Marino, Veneto, Trentino Alto Adige and Friuli Venezia Giulia ) which was then one of the four districts into which Italy was divided. 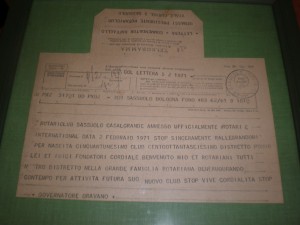 There were 22 founding members: